I had never heard of Zafar Mahal till some days ago when my husband brought it up as one of the places we should be visiting.  And to know that it was in Mehrauli which is about 15 minutes from where we live was even more astounding.

When we finally made the visit today we realized that people living right next to the Palace were also quite unaware of its existence and significance.   We asked some people for directions in Mehrauli and they were quite clueless.

It could be probably because the area around Zafar Mahal has been encroached and people have built all kinds of buildings in and around that it is not seen properly and even the front façade does not give out the impression of the vastness that lay beyond.

The frontage is very simple.  The Mahal looked deserted.  The gates called the “Hathi Gate / Elephant Gate” were massive but closed and only a small enclosure which was part of the gate was open for people to pass through.  We got in not knowing whether we should or not but once inside, saw some men old and young in groups sitting on the inside lanes playing cards.  I was a bit scared, but since I was with my husband, we went on with our discovery mission.

I should confess, it was a revelation!  The more we went in, it opened up more and more surprises.   Even though the building was in a ruined condition, it was delightful to see the gorgeous formations and composition of the pillars, walls and its structure.   Made in Red Sandstone with some marbles thrown in, there was hardly any roof left apart from the main building and the domes.

To think that this is a place where the last Mughal Emperor, Bahadur Shah Zafar wished to be buried was quite shocking.   He used to spend the summers in this place and was called his Summer Palace.

The Palace was originally built by Akbar II and named after his son Bahadur Shah Zafar.   The entrance was then modified by Bahadur Shah Zafar himself.   The tombs of Akbar II, Shah Alam and Mirza Jahangir lie within this Palace.   Akbar II’s tomb is inside a marble enclosure.

There is a royal mosque also built in marble adjacent to where the tombs lay.

The halls in the upper parts of the buildings are vast with columns of arched pillars.  The carved pillars and arcades are beautiful to behold. 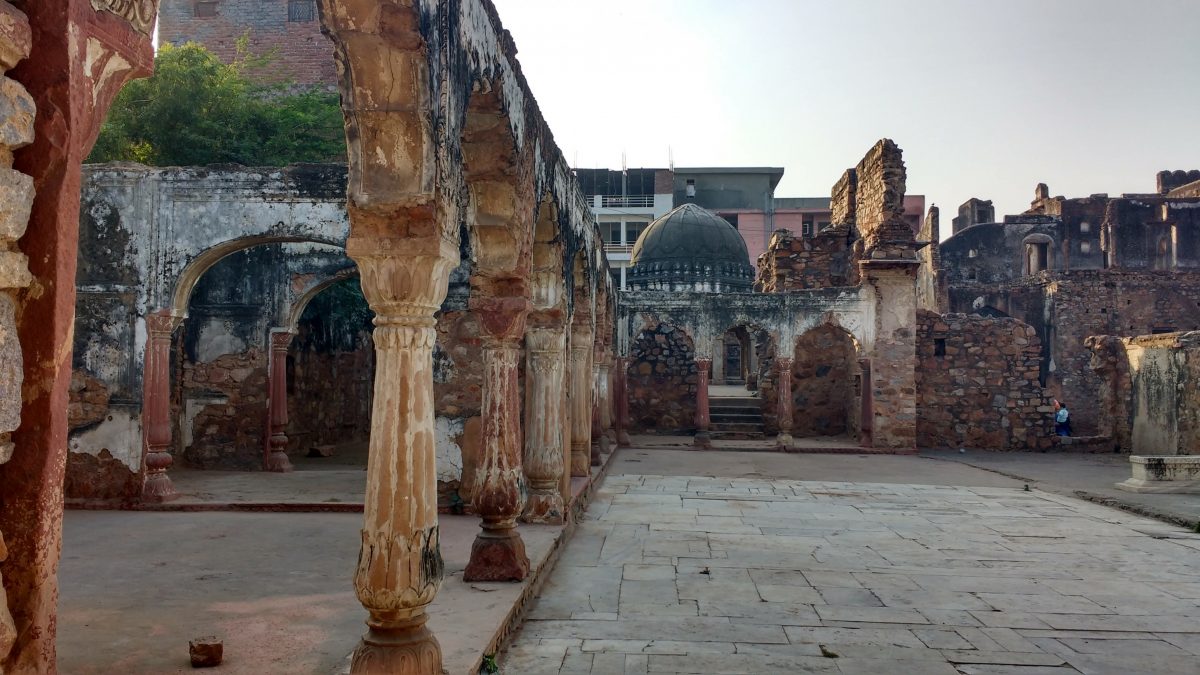