As we exit Nehru Place under the Nehru Place Metro Station towards the Lotus temple, the roads begin to slightly deteriorate. This road definitely needs layering. As we bank left into the road that leads to the Lotus temple, the temple perimeter becomes visible with a lovely fencing that is both aesthetic and useful. The morning sun reflected the temple in all its splendour. 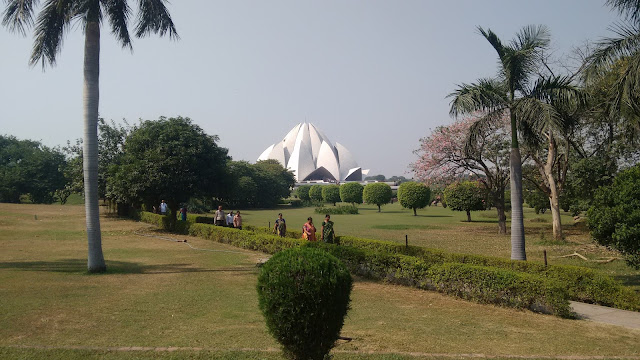 I was taking my cousin, who had come from Kerala, to see a wonderful architectural wonder in modern Delhi – the Lotus Temlpe, the worship abode of the Baha’i community in Delhi. Created in the shape of a flowering lotus, it is an architectural wonder and was opened to public in 1986. It is situated east of Nehru Place, south of East of Kailash and north of Kalkaji. While technically, the place where it stands is called Baharpur, everybody calls it Lotus Temple!! The regular flow of visitors, including a vociferous group of schoolchildren, was picking up as we made our way into the premises. The entry is designed in such a way as to let the visitors view the exterior for an extended period of time before they can enter the sanctorum. Verdant gardens envelop the surroundings and this autumn morning, they were in a colourful riot. 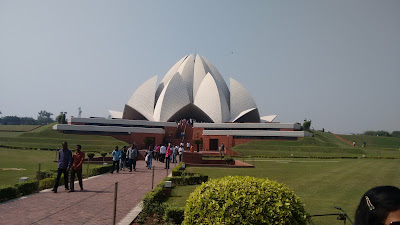 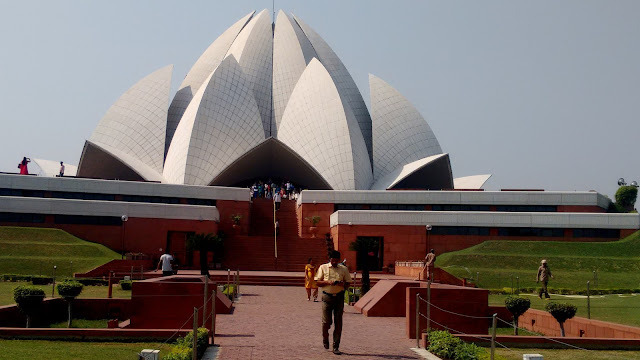 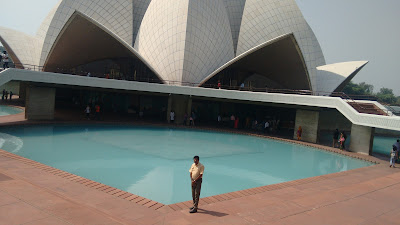 A flight of tastefully crafted steps lead up to the entrance. The structure itself is surrounded by pools of clear water. We came to know that these help keep the sanctorum cool. Footwear is not allowed inside the sanctorum. However, we were provided bags to keep the footwear.
There are nine gates that open into the sanctorum and we entered through one into the coolness of the great hall. Silent and majestic, it was a beautiful experience. We sat in one of the many benches that are provided inside the hall. After a few moments of meditation we explored a bit and then made our way out. The bags were returned and after the many customary photo sessions, we made our way back to our car.

1. Visit towards the evening. The light show is a must-see!
2. More than 20% of the total electricity requirement of 500KW is generated through solar panels.
3. There is an elaborate arrangement for water conservation throughout the premises.
4. The pools cool the sanctorum even in the most fiercest of summers.
5. Photography inside the sanctorum is disallowed.
5. Entrance is free.